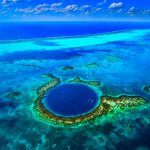 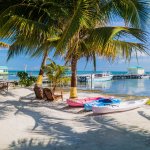 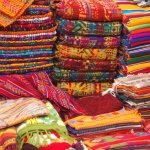 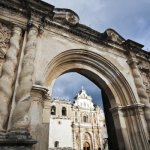 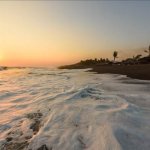 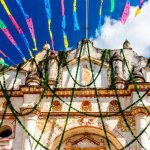 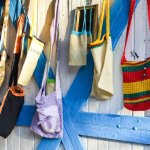 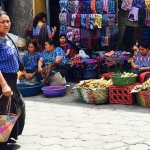 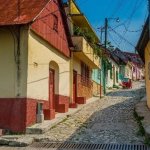 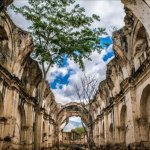 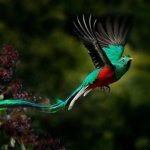 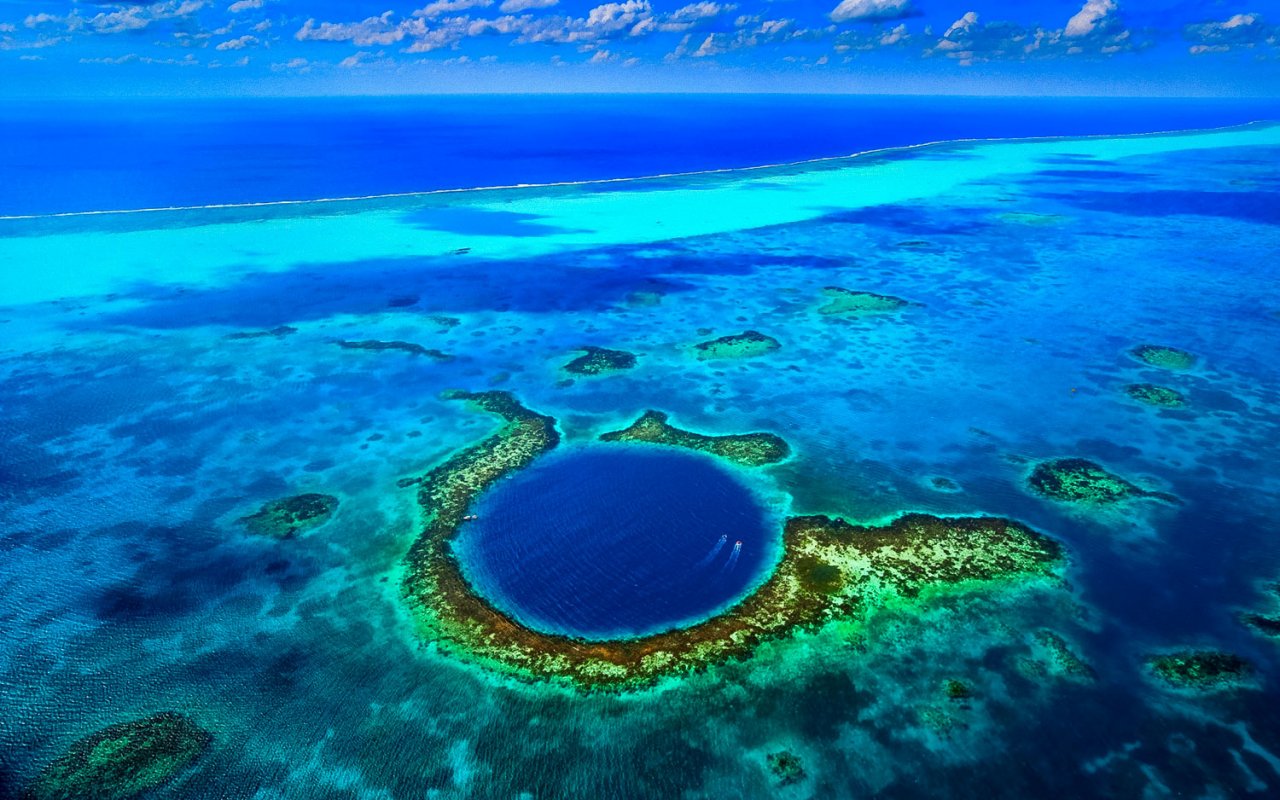 Nested between Mexico and Guatemala, Belize is a small country of less than 350. 000 inhabitants often unknown by the general public. On one side, 250 kilometres of coast with the Caribbean Sea for the only horizon. On the other one, a luxuriant jungle protecting exclusive archaeological sites. If Belize is the only English-speaking country of Central America, its roots are resolutely Mayan as manifest its archaeological relics which we invite you to discover. You can also enjoy its exceptional coral reef which makes Belize as one of the nicest destinations of diving in the world. Attention, a trip to Belize is not without risk as Francis Coppola said, you could fall in love with the country or consider yourself as a freebooter of the time of Pirate of the Caribbean! 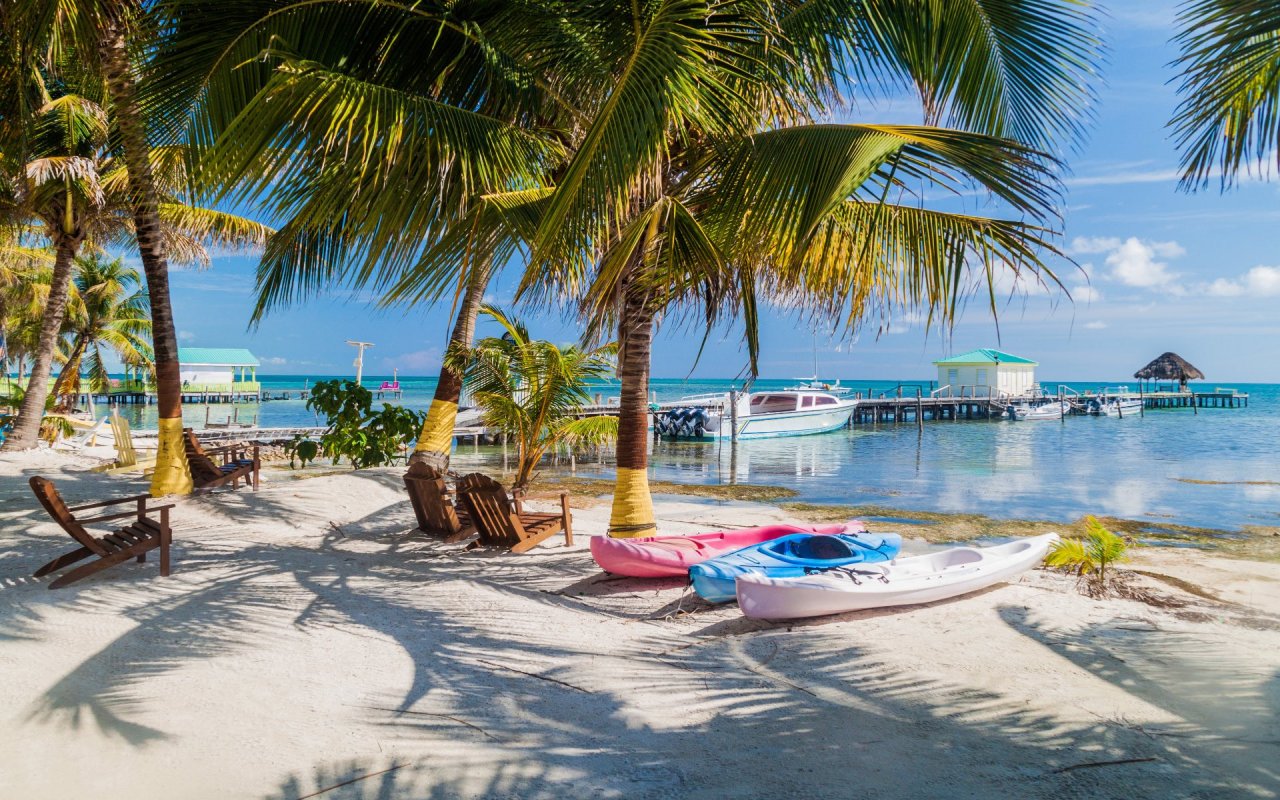 Belize shelters the second biggest coral reef in the world. We can find there more than 70 types of corals, 400 kinds of fish and of even 200 deserted tropical islands. The Blue Hole, in the centre of the atoll Lighthouse Reef also attracts all desires. This ancient calcareous cave of 300m of diameter and 125m of depth was made famous by Jacques-Yves Cousteau who considered it to be one of 10 best sites of diving in the world. During your stay in the béliziennes Caribbean, you will have the pleasure to practice diving, snorkeling, peach, or simply, chill in the sun. 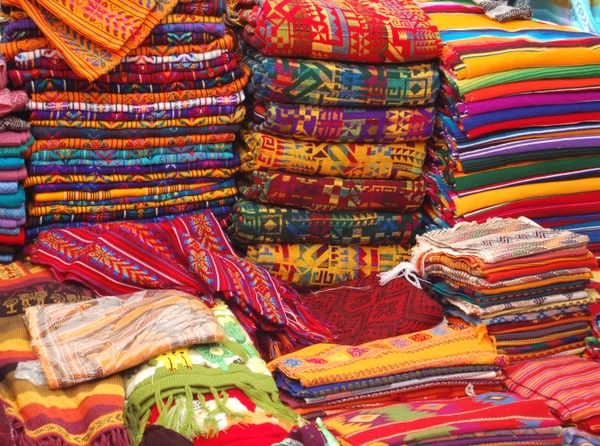 The North and the East of the the Lake Atitlan form the high plains known as Altiplano. The region is reputed for its Mayan traditional villages which perpetuate an ancestral culture. One of the most important markets of Latin America is held in Chichicastenango. This one is known for hos lively colours and with unknown exotics tastes. Every village has its own traditional costume, rich in signification. Some indications on nuptial and social status can be found on it.

More in the north, clouds cover the mountains of Cuchumatanes. It is cold on the high lands and hot and humid on lowlands. Spanish, Quiche and Mam are the most speaken languages in this region. The forests of pines and reliefs give nice hikes and walks that could be performed on horseback. This tourism far from popular ones allows to go to the discovery of the local populations and to share their way of life. 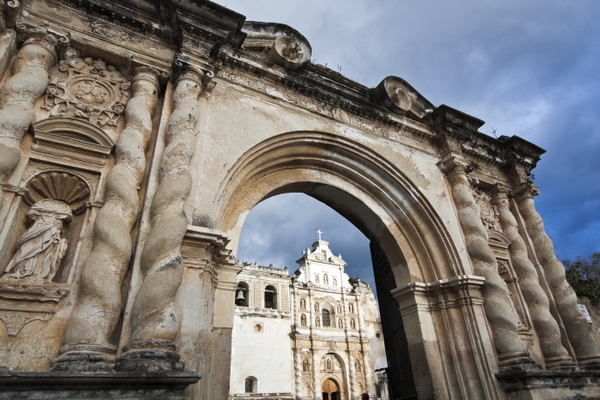 Antigua was from 1543 to 1773 the capital of the Kingdom of Guatemala which stretched then from Costa Rica to Mexican Chiapas. The colonial city suffered throughout its history of many natural vagaries: seisms, inundations, volcanic eruptions. After the big earthquake in 1773, the government decides to re-locate the capital in about fifty kilometres.

Since, it looks as if the time stopped in Antigua. The city is a roofless museum which counts more than thirty monasteries and convents, a cathedral. Streets laid with cobblestones adjoin the patios full of flowers of the colonial houses. We walk along the arcades of Park Exchange by noticing volcanoes Fuego, Agua and Acatenango. Small coffees, nightlife and markets of trade are appreciated there. An inevitable stage of your trip! 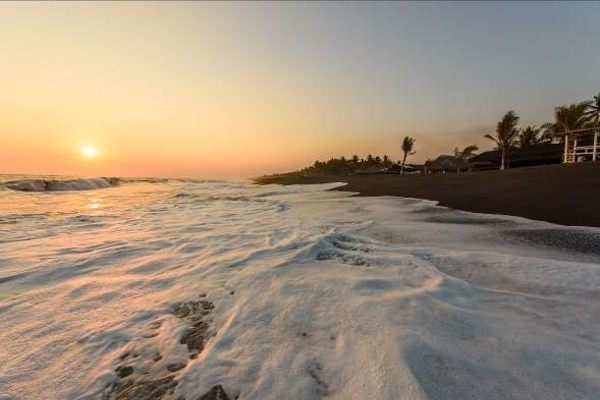 The region of the Pacific offers 300 kilometres of beaches of volcanic sand. The East Coast appreciated by the surfers and the amateurs of fishing sports. Marin faune has also a rich environment (marlin, sailfish notably). In some periods of the year, it is possible to notice whales, dolphins or to attend the laying of the turtles on the beaches of black sand.

The sides of volcanoes take part in the walking, in the observation of birds or in the visit of plantations of coffee. The archaeological site of Takalik Abaj manifests the influence of olmèque culture, more ancient pre-Columbian civilisation (from 1 200 to 500 years before our epoch). 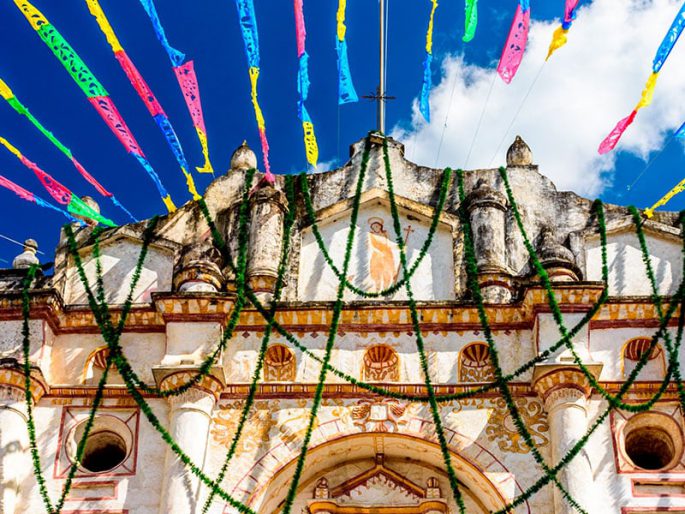 Guatemala City is the most thriving city in Central America with modern buildings and business centers; in contrast, Antigua Guatemala the colonial and bohemian city is a mixture of ancient buildings and deep-rooted customs and traditions.
Guatemala City is the most modern and cosmopolitan city in the Central American region, it is the ideal place to hold congresses and conventions, enjoy playing golf, get medical treatments, and tour the many shopping malls, among others. It is a must to visit the Historical Center with its cathedral, its centennial buildings and museums, which reflect the history of the country.
It also has different entertainment points such as the Zona Viva, where they enhance their exclusive hotels, restaurants and nightclubs. Another place is Cuatro Grados Norte, a neo-urbanist concept with cafes and restaurants, where cultural activities are the main element to enjoy. 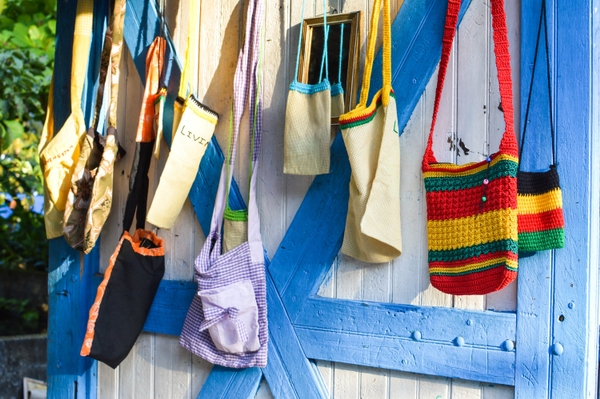 East of the country, the lake Izabal is encircled with a tropical flora. The region accommodates a fauna rich and varied with more than 350 kinds of birds, monkeys, dolphins or else of manatees. Famous Río Dulce links up the lake Izabal with the Caribbean coast by throwing himself into the Amatique bay. Strong San Felipe reminds the visitors that the region was regularly the prey of multiple pirates attacks.
In Carribean side, culture and language Garifuna predominate. The population comes from interbreeding between Africain slaves and autochthonous populations. The village of Livingston is the Guatemalan cradle of culture Garifuna. They are allowed to rock by sound of waves and afro-Caribbean rhythms there. The contrast with the rest of the country is impressive. 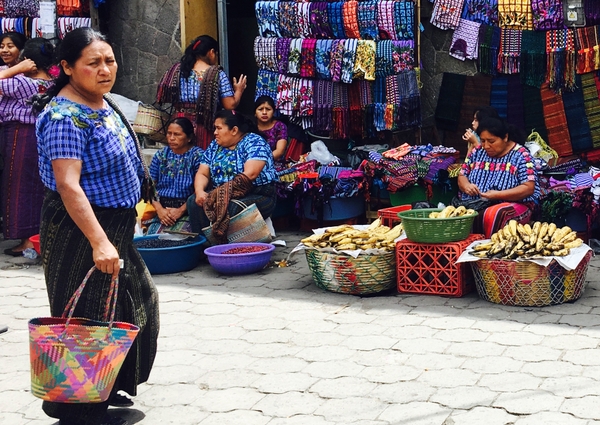 Located in the Southwest of the country, Atitlan is a lake volcanic lake located in 1 500 metres in altitude. Volcanoes Toliman, Atitlan and San Pedro dominate the lake, giving exceptional panoramas. The fertile soil of these sinuous mountains became the earth of the ethnic groups Cack'; chiquel, Quek'; chi, Mam and Tzutujil which continue perpetuating their traditions.

The lake is encircled with picturesque villages. We can reach them with fisherman's crafts boat to discover local markets, traditional costumes and artisanal products. They admire methods of weaving, indigenous painting, étals of fruits and exotic vegetables there. Considered by the writer Aldous Huxley to be the most beautiful lake in the world, Atitlan and its villages surroundings deserv several days to explore them. 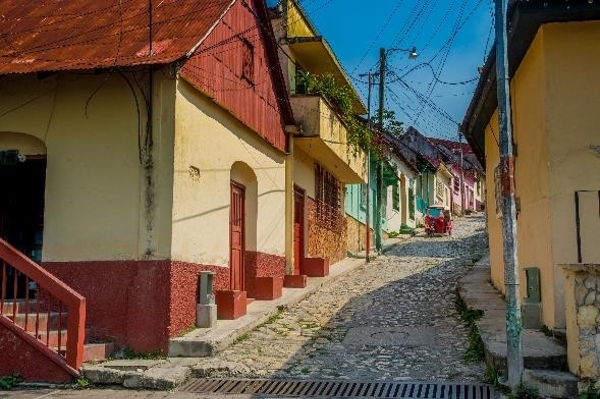 Edged by Mexico in the North and in the West, by Belize in the East, the department of Petén is covered with a thick rainforest protected by huge national parks. Petén shelters a fauna extremely varied with jaguars, pumas, monkeys spiders, howler monkeys, tapirs, macaws, toucans and all types of parrots. As soon as we enter there, the jungle surprises us by its noise, its smells and its colours.

The forest conceals other treasures with invaluable Mayan relics, the most famous of them is the site of Tikal, admitted in the worldwide heritage of the UNESCO in 1979. The Mayan city plunges us into a mystical ambience in the sound of the howler monkeys and of toucans. To keep the adventure, some sites as El Mirador request several days of walk.

New techniques revolutionise researches of the archaeologists. So, at the beginning of 2018, an international team discovered a dozen of Mayan cities linked up between them and a network of high roadways. Petén has not revealed all its mysteries yet …

Guatemala is delimited in the South by Honduras and El Salvador. The cordillera Sierra de las Minas is one of the green lungs of the country. It shelters 800 kinds of mammals and 20 kinds of endemic birds.
The volcano Ipala is one of the most popular for running of the region. Sides are climbed up in about 1 h 30. Once you reached the top at 1 650 metres in altitude, you can appreciate the view on the resplendent lagoon formed in the crater. It is possible to have a swim there to lower the temperature and relax before attacking descent. 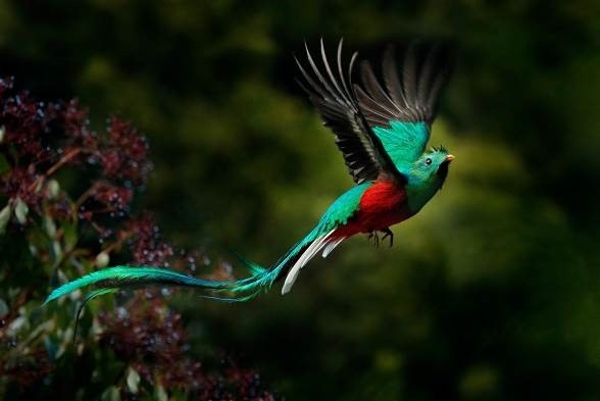 Verapaces is characterised by luxuriant forests, waterfalls, natural swimming pools and caverns. The region becomes divided into two, on one hand Alta Verapaz, in cold climate and with reliefs covered with fog, on the other hand Baja Verapaz in hot and tropical climate. The territory of Verapaces is a paradise for the lovers of nature and those who are looking for adventure.

The natural swimming pools and waterfalls of Semuc Champey give an idyllic frame for a bathing in the heart of the countryside. The caves of Lanquín or Candelaria invite us to discover their depths. The region shelters many kinds of birds like the rare Quetzal owhich is the famous emblem of Guatemala. The luckiest one will be able to see one of these splendid birds or appreciate some of 800 kinds of orchids that accommodate forests.